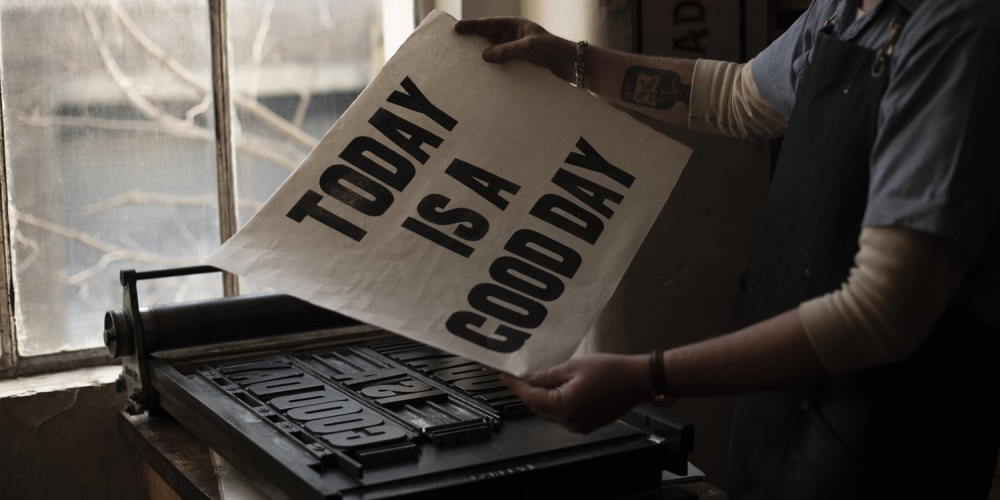 WHAT IS LETTERPRESS PRINTING?

Letterpress printing is a ‘relief’ form of printing, meaning ink is applied to the raised areas of a printing plate or block and ‘pressed’ on to a piece of paper or other material. This form of printing initially originated in China and the Far East, however in the western world it came to prominence in the 1400s. For over 500 years it was the primary form of printing from books to simple pamphlets. Even though it is not used at the industrial scale it used to be, it is still being used today for more artisanal applications.

The 15th century saw a massive revolution in the printing throughout Europe and the Western world. Johann Gutenburg invented the printing press and introduced Europe to moveable type.

In the decades just preceding the 15th century, printing of any kind required craftsmen to carve entire pages of text into wooden blocks. Once the text was carved, the space around the letters had to be whittled away so the text was the only surface that would touch the page. The blocks would then be inked and paper placed on top, and rubbing the paper onto the wood would create an impression. As you can image this means each page of a book would have to be carved out individually, a time consuming process meaning copying a book fully would take a massive amount of time and skill. Gutenburg revolutionised this process by developing individual reusable letters carved into wood blocks. These wooden blocks could then be arranged, rearranged and reused to form full words over and over again. Gutenburg then developed this theory to use metal type to improve the final quality and clarity of print. This metal type included lower case, upper case and punctuation marks.

The printing press Gutenburg developed, the ‘Gutenburg Press’ or screw press was used to transfer ink, which he also developed by him, to the paper. His press printed approximately six pages of a book per day. The most famous of these books was the Bible or ‘the Gutenburg Bible’ – 180 copies of this were produced.

Gutenberg’s press is considered to be the first instance of mass communication, after which letterpress printing became the primary method of printing and distributing information. Books and printed materials became far more available to the people who had previously no access to it. This advanced educational and the sharing of information and ideas.

Letterpress printing became far more automated throughout the centuries with inking and production increasing in speed and reliability. However during the late 1970s and 1980s, with the advent of computers and the development of offset lithography and digital processes, letterpress slowly fell out of favour. Printing companies began to transfer from letterpress to other more profitable methods of printing such as offset lithography. (In offset-lithography, the paper does not come into direct contact with the printing plate. Instead, the image is transferred to a rubber roller. Lithography is used for medium and long print runs of products such as magazines, posters, packaging and books.)

A major disadvantage of most letterpress presses is that you can only use a single block colour at a time. Printing multiple colours can be very time consuming and challenging; areas of half tones and very small detailed areas can often fail to print. Solving these issues was a very skilled process.

Even though letterpress fell out of favour there were still advances in the process. In the 1980s, Photopolymerplates became widely available which meant a photo negative could be transferred to a plate. This enabled individual customised designs to be produced easy and at a larger volume, opening up the letterpress method to a whole host of new designers and craftsmen.

Today letterpress is used primary by small companies and craftsmen that produce fine, handmade, limited-edition books, letterheads, business card, greetings cards and many other fine small run printed products. These craftspeople use the tactile nature of letterpress – and the impression or ‘bite’ the block makes in the paper – to create beautiful, original designs.